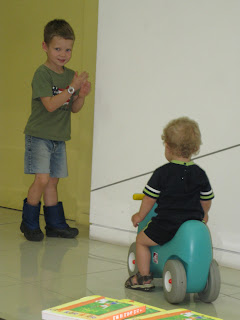 Lately we've been going to the hemophilia clinic most days as Tristan's current goose egg is taking a while to heal. It doesn't help that he bumped it again a week ago.  Tristan is a trooper, and sticks out his little arm for them to put a needle in his vein and give him the factor VIII.  Sometimes he cries a little, sometimes he doesn't.  At least there's entertainment while we wait, and Kyler's always in high fashion. 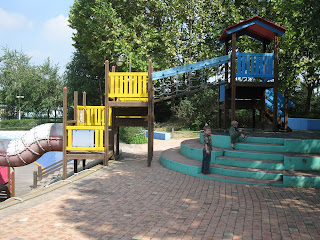 We went to the World Cup Stadium Park a while back.  The playgrounds aren't necessarily as safe as in America, but the kids did fine. 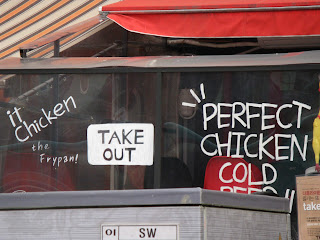 There are plenty of questionable trademark knock offs here, although I'm pretty sure Chick Fil A doesn't serve beer.   Doesn't every kid stand in the dishwasher? 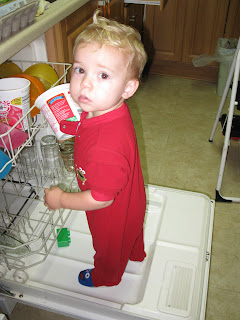 Kyler has had fun with the Halloween costumes which emerged in the last month. 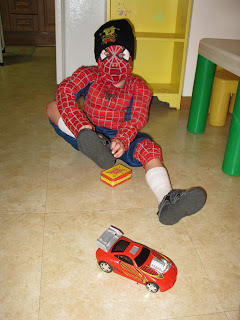 I love these signs. 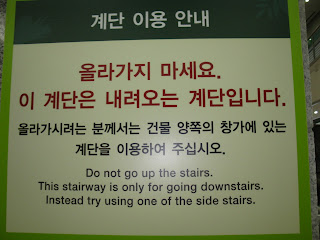 Another of Tristan's daily tasks is to get into the bike-riding gear.  The boys are required to wear orange vests along with helmets when riding bikes in our village. 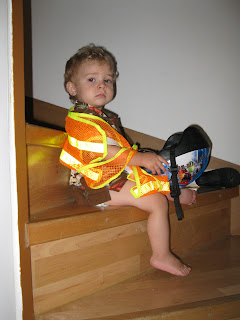 The base had a fall festival recently.  I put Tristan in this bouncer with Kyler, and they had a ball.  Dean entered a hot pepper eating contest and won handily, of course.  I've never seen anything too hot for the man.  They each had 10 Korean peppers.  He snapped the stems off first, then at "go!" popped all 10 in his mouth, munched them quickly, washed the remnants down with water, and had his mouth inspected.  There were a number of Korean participants, who were probably favored to win since their food is often spicy.  Dean won a new Blu Ray DVD player, and the new Robin Hood movie in Blu Ray.  He did say his mouth and sinuses were on fire after the contest. 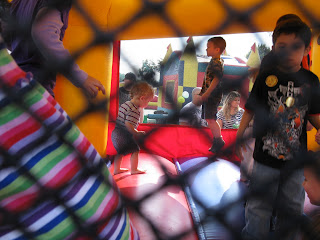 Posted by Living Lavallee at 9:44 AM

Way to go Dean for beating out the Korean in the chili pepper contest and winning great prizes!

Wow, Becky! I have been catching up on your blog and I am amazed at the adventure you are having! Your boys look like adorable handfuls, and I love reading your posts, which ring so true to life, and have just enough sarcasim and wit thrown in...
I look forward to reading more!

Dwight laughed at the dishwasher pic since our little guy who is the same age as Tristan is especiallly fond of dishwasher climbing as well.