So Kyler's birthday rolled around recently.  We agonize every year over what, if anything, to do for the boys' birthdays.  I'm just not a kids' party planner.  And, the house was in a state of terrible disarray with boxes and stuff everywhere needing to be put away in an organized manner.  I can only work so quickly.  So the short-term plan was to not tell Kyler that it was his birthday and celebrate a couple of days later, when things would be in better shape.  I didn't have birthday presents yet for him, other than a chimpanzee shirt I found in New Mexico before we came here. 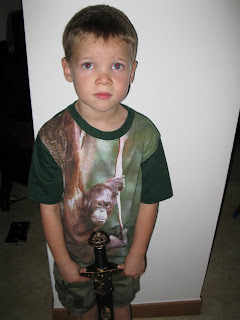 Alas, Grandma and Uncle Bro called him up that morning to wish him a happy birthday, and the cat was out of the bag.  Dean was off work because of Typhoon Kompasu which came through and did some damage on the base.  He was out and about for a meeting and stopped at Emart to get some excitement, and I made a cake, along with some of Kyler's favorite fare, namely mac'n cheese with hot dogs for dinner.  The cake was easy, and Dean said he thought it was the best cake he had ever tasted.  I got the recipe from Heidi's recipe blog.  It calls for one baked German chocolate cake (I had a triple chocolate mix on hand, so used that), with holes poked in it with a fork when it comes out of the oven, then pour sweetened condensed milk and warm caramel topping over it (to soak into the holes), and top with whipped cream, with crushed Heath bar on top (I had Heath chips, and made caramel topping since I didn't have any on hand and the commissaries were closed due to the storm).  I thought it all turned out nicely, but Dean later asked me why I was so openly hostile to the children.  Huh?  We had decided together to just postpone it a couple of days until we were more prepared, and I was thinking of just giving him money so he could shop for his own presents, not to mention the money from Grandma.  He seemed happy enough with all the attention and the cake and presents.

In all reality, birthdays weren't that big of a deal in my childhood.  My mom would spend the day (since mine is in the summer and Nikki's is during the holidays) telling us that we should work all the more on our birthdays.  I do remember a couple of birthday parties as a young child, and we always got presents and cake (though as we got older, Nikki and I may have had to make our own :) so we were celebrated, but certainly not to the extent that so many kids are.  To this day my dad has no idea when any of our birthdays are, and it doesn't bother me - I think it's kind of funny.  Birthdays were a bigger deal in Dean's childhood, hence his concern.  At Emart Dean got Kyler a sword, a bow and arrow set, and a radio control airplane.  Uncle Dusty sent him a new football, that he can't chew bites out of (like the poor Nerf one he's had for a few years). Then, a short week later it was Hunter's birthday.  Dean sang Happy Birthday in Portuguese, complete with clapping.  It is convenient to combine their birthday celebrations, or a party if we do one.  But, we just had "cake" and he requested his favorite meal of spaghetti at home.  He got money from Grandma, a new war/strategy game from Uncle Dusty/Bro, and a dart gun, toy binoculars, a movie, etc. from Dad and the hostile one, ha ha.  He had requested a cake with droids on it (from Star Wars), and ever wanting to please my children and brimming with talent, I came through for him.   Master Kyler came along and added some embellishments, but the droids are still in place, so no harm no foul, right? 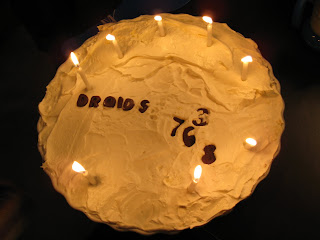 We felt a little bad about not having a party.  They go to other birthday parties, so they expect it.  I can't blame them.  But since we move so darn often and don't necessarily have scads of instantaneous friends to invite (not to mention all the other reasons already listed), we invited a nice boy over for a few hours to play and celebrate with him today (Saturday).  He brought nice Iron Man presents, which was above and beyond, and they all had a good time.

Since I've neglected to post anything about their birthdays in the past, and this is the closest I've ever come to a journal, I will say that we did manage to throw together a last minute party for them last year.  Most of the guests were sick or had other things come up and couldn't attend, but they still gave them presents, which was above and beyond.  So, we had the Schrubbs and Tim and Michelle over for burgers and cake, and it was very nice - I thought: )

The year before, I was still in Astoria with just Kyler, so I took him out to eat and told him "happy birthday" and that was pretty much that.  He turned three and sure didn't know anything about birthdays.  Hunter was in Jacksonville with Dean, so Dean took him to Chucky Cheese.  The year before that we were in the abominable rental house in Astoria and just had dinner and cake and presents at home for each of the boys, and it was fine.

The year before that, we agonized as always over what to do, and I finally came up with having a party for Hunter at Michael's, where the kids each made/painted a treasure box to take home.  And for Kyler's first, we had Grandma Dee and the Hernandez cousins over for a little party at home.  I'm shocked that I can remember all that, but the kids are still young, after all.  For Hunter's third, I had just given birth to Kyler a week before.  I'm a little fuzzy on that one, but I'm sure Grandma Dee and the Hernandez' were there.  For Hunter's second, I was living alone in Carlsbad, NM with Hunter while Dean had started working in Albuquerque.  I think we went to Pancho's for dinner with Uncle Bro and Grandma Dee and of course Daddy in Albuquerque.  For his first, we actually had a birthday party in our lovely little backyard in Loveland, CO, with friends and the Burnhams from Denver.

At least it will be another year before the next round...

Posted by Living Lavallee at 8:59 PM

I threw a birthday BBQ for Gavin last week for his birthday. I had the same anxieties about Gavin's birthday too. I wanted to make it special but I am not all that creative. I have just come to the conclusion that we don't need to live up to other people's expectation/talents and do what is best for our own family. It sounds like your kids came out pretty well:)

I can't ever decide the origins of dad's ignorance about his childrens' birthdays. So I've decided that either as a joke he pretends to keep himself oblivious; or, he really doesn't care about birthdays and so when pressed he acts like he really knew but kept that knowledge from us as a joke. After all, he remembers his wife's and mother's birthdays, as well as his siblings. So it isn't as though he just isn't one to remember dates.

I'm surprised LaVerne was such a bah humbug about birthdays for you kids because Mom (Grandma B) always made each of ours very special and we looked forward to them for months, counting the days and keeping big secrets about what we would give each other for presents. Mom always made us a beautiful dress and usually a raisin spice cake with carmel frosting. Yum! Occasionally we got to invite friends and have a party but usually just the family did something special together. I'm with Kandra, just do what you feel comfortable with and don't compare yourself with other "supermoms".