OK, maybe I will a bit.  I am feeling a little overwhelmed with all the differences here.  It's not just that it is Korea and we're foreigners, but also that Seoul is such a huge city and I am still a country bumpkin at heart, my home town of Ramah having a population of 400 people.  The first week I really didn't leave the apartment alone.  I went with the ladies to the zoo, and then where ever Dean would take us after work and on the weekend, but I didn't know my way around this housing area we live in, much less in this part of the city, or how to get to the main post (base).  So, the furthest we strayed during the day were the swimming pool and the commissary, which are both virtually across the street.  I hardly know how to use the phone.  I kept trying to call the hospital yesterday, and kept getting wrong numbers.  Then Dean called and I told him my problem and he said I'd have to dial some other numbers first...  why aren't the phone numbers listed with those other numbers if they are required?  I dunno.  Dean thought I should hop on the shuttle bus here and go on over to the main post and do this and that, and I thought he was crazy.  First off, anything I do can be multiplied by four, since I have to drag three little people along, so why on earth would I run around and get lost with them in tow?  No thanks. 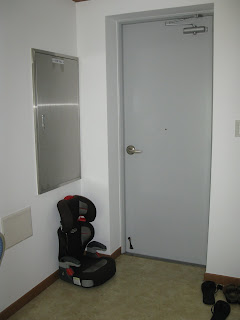 This is our entry way, on the inside.  I'm sorry, but it's u g l y.  The electrical box and an ugly metal door welcome us home.  There are a lot of things like that that kind of bug, but who am I to complain?  I know, I need to count my blessings.  The housing office brought this bouquet of flowers today. 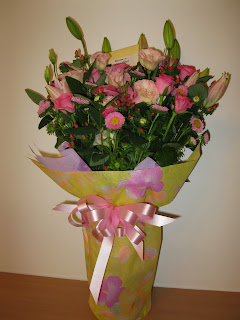 That is very nice, and I appreciate it.  The apartment is fairly nice, with lots of built in closets with shelves and drawers.  The kitchen is roomy with lots of cupboards and counter space.  Had I known how much kitchen space we'd have, I would have brought all my kitchen stuff and serving pieces.  Oh, well.  We do have four bedrooms and three full bathrooms - can't complain about that.  There's a steep, rather treacherous wooden stairwell leading to our second floor.  It is spiral, and very similar to my parents' staircase that goes to the basement, only this one is narrower and steeper.  It's perfect for a toddling hemophiliac.  And all the floors are hard - no carpet whatsoever.  Also great for a newly walking babe.  Anyway, we're getting used to it all.  And apparently Wal-mart will ship some cheap 5x8 rugs to us, so maybe that will help.  The PX (exchange, military department store) is over priced with little selection as always.  Oh, and our microwave and toaster oven didn't fare well in the move.  They both only half work now.  We can claim them, but what a hassle. 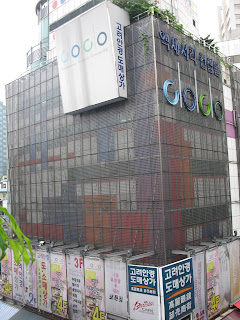 Anyway, enough with the complaining.  We wanted to go out and see some sights on Saturday, so naturally it rained all day.  We still went, but how much fun is it to, again, haul three kids around in the rain.  Everyone uses umbrellas.  We had one that Dean had just bought, that the handle came off of, so it was worthless.  And, we had an Elvis one that Dean refuses to use.  So we wore our hooded, waterproof coats.  Note, it is summer.  Even though it is raining, it is anything but cold.  So that was miserable.  We  bought another umbrella from a vendor.  We took the subway to get to a shopping district.  The subway system is way too complicated for this Ramah girl.  Dean understands it and had been using it, so he was trying to teach me.  It's like trying to understand organic chemistry (easy for him, not so for me).  He didn't realize that we would each need a card, though; we were all trying to use his card, but it wasn't working.  A good samaritan who spoke excellent English came upon us and helped us out a bit.  She said that the subway system in New York City is much more complicated, as she has lived there.  She insisted that we go to a mall that was right there, rather than the outdoor shopping district we were heading to, because of the rain.  We went in the mall, and looked around and bought some lunch at a food court.  But we didn't have any use for a mall, and this one was pretty high end. 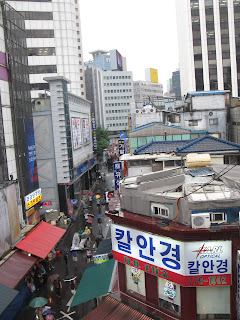 So, out we went and made our way to an underground portion of the shopping district, to get out of the rain.  There are countless vendors and tiny aisles to walk through - really fun with a stroller.  All the women wanted to see Tristan and wanted me to put him on the counter for them to look at him and play with him.  I now know what it must be like to be a celebrity.  Forget shopping.  It was like carrying the Dalai Lama through his followers.  And, Korea has long had the reputation of having cheap shopping, but as Bro's mother-in-law told us before we came, that is not really the case any more.  I was looking for rugs, and a small bathroom rug was like $50.  I imagine if I had the time, and no child celebrities in tow, I could look more and maybe find a bargain.  Dean had bought something there a while back and had talked them down in price a little.  I'm not into that yet. 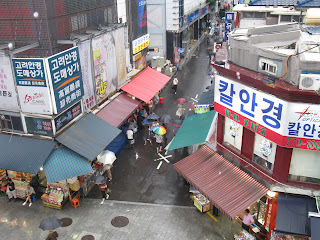 Taking pictures of the city is kind of like trying to take a single picture of the Grand Canyon.  You can only get just a snippet of it.

Dean had bought a beautiful orchid for me before I got here.  We just needed an orchid pot to put it in. So, in that shopping area, we found a whole building that seemed to be in the floral business.  We went up each floor until we found one that had tons of orchids, but I think they were for wholesale.  We asked with hand gestures, a little English, and the handful of words that Dean knows if they had a small pot.  They looked around and found one, and only asked 5000 won for it (about $5).  It's gorgeous.  The little dog in the picture was given to Dean by the civilian vet at Camp Lejeune before he left, to remind him of the working dogs there. 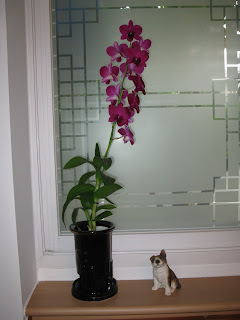 So, we made our way to church on Sunday.  It was Dean's first time to find his way on his own in a car.  Our GPS is no good here, so if we want to get one here, which we probably should, it will be about $400, with English maps and speaking.  We got a bit lost, and I can't even describe how wild the traffic is.  I don't know if that's a Korean thing, or just a big city thing.  The church building is about five stories: two for parking, and then three stories for the church.  The kids couldn't resist the elevator, of course.  People were very nice.  It is called the Seoul English Branch.  It is about half military, and the rest are anything from English teachers to American employees of Samsung or other Korea-based companies. 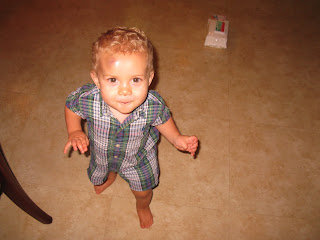 On Friday, Tristan fell and hurt the same spot on his forehead twice within about an hour, once on a granite floor on post, and then on thin commercial carpet on post.  He has a big goose egg from it.  It seemed stable enough until about Sunday evening when it was noticeably much bigger, so we were a little concerned that he was having an internal bleed.  When hemophiliacs bruise or get bumps like that, they bleed internally, which is just as bad as a wound that bleeds externally.  So I emailed the hemophilia doctor in North Carolina that had seen Tristan and Hunter and told him about it.  He said it sounded like it did need to be treated with some clotting factor, which we have on hand.  So, I called the hospital here to talk to a doctor about it.  These are the folks that didn't want us coming at all, so I had that to look forward to.  The pediatrician called us back this morning and had us come in, so they gave him a dose of clotting factor.  There are bruise looking spots on either side of the bridge of his nose, I imagine from the blood draining from the goose egg above.  So he looks kind of beaten up.  He was very very good for it all.  He didn't even cry when they started the first IV, but it blew the vein so they had to do it again, and he did cry the second time.  Poor baby.  Hopefully the swelling will go down now.  The doctor told me he didn't like doing all this, as he had to fit us in between his appointments and he had to call other doctors to consult about it since he doesn't know anything about hemophilia... and has to take their word for it (namely a local Korean doctor, whom the hematologist in North Carolina referred us to).  I can understand that, but it sure would be a hassle to have to find our way to the local hospital with a hematologist.  This is why they didn't want to deal with us in the first place.  But, we got it done.  The goose egg is on the left side of his head, kind of hard to see in this picture.  He walks all over now, but is still unsteady.
Posted by Living Lavallee at 2:45 PM

Ok...you have a RIGHT to complain! I would too. In Louisiana we lived in a place that looked like that. White walls, white floors with a lovely electric box near the front door.

I couldn't imagine having to do all of that with three kids in tow and your poor baby! Sorry you have to deal with that.

I know people have probably told you this but it will take time. Slowly but surely you will make your house a home, get into a routine, find your way around and make friends. I know with any place we have moved to it takes a 3-6 months. It seems like a long time but it will go by fast...trust me.
Think of it as an adventure...:/

So you'll never get used to living in a foreign country--I guess you get accustomed to it. My years in Chile made me love the people there, but it also made me love America and our culture even more.

You are so brave to live in another country with three little kids. I can't even imagine. Keep your chin up. I know you will learn to love it all. Especially since you have your little family right by your side.

Wow, sounds like quite the place. Sorry about the doctor trouble - gee, maybe the guy should just study up on hemophelia a bit and quit complaining... I'm just sayin'. Hopefully you can find someone nicer soon.

I just have to add that I hate when my food is too fast :P Do you think the "anti-shoe" is some strangely smelling super-hero's arch-nemesis? ;)