This is Day 2 of our current move.  Some of the worst days of my life have been moving days.  I am most grateful that the military moves us now.  It's a large part of why I have been so enthusiastic about being an army family.  No DITY (do it yourself) moves for us!  So today there was just a bit of humor to lighten things up.  Pancho, Dean's bird that he's had for 15 years and got as a hatchling, has a few, let's say, eccentricities. He happened to be sitting on his perch in our room.  He is terribly afraid of large items that come into the room with people seemingly attached to them, such as a rolling computer chair that someone is pushing from behind, or a hand truck/ dolly.  The movers walked in with the hand truck to retrieve a large dresser and Pancho freaked out, screaming like a Banshee, as they came through the door.  If you've never heard a Macaw screeching, be grateful.  They are deafening.  Pancho flapped his clipped wings all the way across the room, which the movers ran out of quick as a flash.  Dean had to remove Pancho from the room for them to be willing to go back in.  He had to bite his tongue to not laugh his head off.  This picture is from Dean's convalescence several months back.  Pancho loved hanging out with him all day, Hunter loved playing games on his phone, and Tristan is always happy to be included. 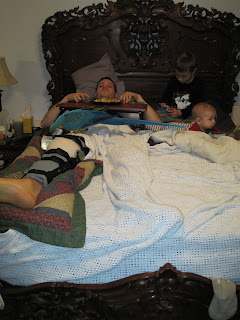 Funny also is how movers often under estimate the weight of our dining table and piano.  The table is solid marble, and pretty big.  I mentioned to the main dude that it was very heavy, and a few times queried him about how much weight he estimated that we had so far on the truck, as we are limited and have been worried about surpassing the limit.  He kind of blew me off and guessed "oh maybe a few hundred pounds" for each of those items.  Later he told Dean that the piano and table probably added up to a ton, once the table was crated.

The computer will be packed up tomorrow for our "express shipment", so I'll be mostly off line for a while.  We'll be headed to NM late next week for a little pre-Korea visit with the families.  I have been most amazed by people's generosity in serving us here.  A couple of dear friends have been taking the younger boys for the entire day, two days now!  That is no small feat!  I can't begin to express how much I appreciate it.  When we moved from Albuquerque to Astoria, OR, Jernon Kelly took Hunter and Kyler and kept them all day, overnight, and much of the next day until we were ready to leave.  I was floored.  That move we did ourselves and was the most abominable of all moves.  I am humbled by the spirit of service all these ladies have, and hope to be more like them.  Hunter is still in school, which continues until June 10.  He'll miss the last few days.  Today was "Fun Day", or what we would have called "Field Day".  He had a lot of fun, of course.
Posted by Living Lavallee at 8:43 AM

Good luck with your move. I hate moving days as well. We somehow end up moving on either the most hot and humid days, or the hot, humid and rainy days. Hope you got the book I left by your garage door. Thanks.

Aww, I'm sad that you guys are going. It has been fun getting to know you and your adorable boys. I hope the move goes smoothly and that we run into each other again someday! :)

Pancho looks like he's eating Dean's knee... LOL. I hope you guys have fun over there!

Hope the whole move goes smoothly. It will be a neat experience for your family to live in a different country. Good luck with it all.

I can't believe you are moving to Korea! I hope everything goes smoothly. I bet the cuisine will be interesting. Especially for the kids!

Can't wait to see and hear what life is like there!