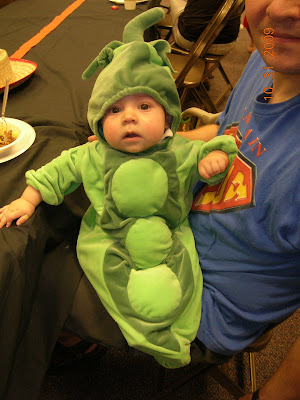 So I'm totally holiday lame, and just try to get through a lot of these occasions with at least a little cheer for the kiddos and occasionally a picture. This year I put off buying pumpkins until a week or so before Halloween, and there were none left. Anywhere. I looked at Walmart, a farmers' market, and a couple of grocery stores. I was done looking, and pumpkinless. Oh, well. There will be pumpkins in future years, I'm sure. I even planted some seeds in the spring, but had no luck with that either.

I did manage to get a Spiderman costume for Hunter, which he thought was great. I picked up a little alligator costume that is sized for about a 12-24 month child, to have on hand for Tristan in a year. Kyler wanted to wear it this year, and it was not a battle I would choose, so that's what he got to be. On an appropriately-sized child, it would have covered most of the body. On Kyler, it came about to his waist. But really, who would know any different? A former realtor of ours actually sent a costume for Tristan, so he was a pea in a pod, and that was great. He's the only one I managed to get pictures of on Halloween. Had to get the others to put their costumes on later for pictures. The night before Halloween we drove out to Mike's Farm with the Rogers to go on a haunted hay ride. Standing in line for two hours wasn't too fun, but the ride was enjoyable. Hunter had the most fun, and wanted everyone to know that he wasn't scared. He even pulled the hat off one of the haunters who jumped out of the woods as we rode by in the hay wagon. On a side note, he bore his testimony in church on Sunday and I heard someone whisper "That's the boy who sang so loud last week". He's a memorable kid; what can I say?

I actually got a second place ribbon for my dessert at the church party. I was stunned, as making it was a fiasco and the presentation was ridiculous (pumpkin filling squirted out across the cake stand, and the whipped cream fell right off the top, as I didn't think before I put it on the still-warm chocolate glaze), but it was festive - a chocolate pumpkin roll. The chile sloshed and sloshed in the crock pot on the way to the church. I learned through experience, once again, to not take a full crock pot. Not even close. Now the car smells like chile and needs to be shampooed. The crock was in a cardboard box, but it was awfully full...

Dean occasionally needs to go to Fort Bragg, two and a half hours away, for official army business such as buying army pants or uniform patches. There is nothing "army" whatsoever on this marine base. Today he needed to have his official pictures taken. I've said before that I would like to go, as I haven't been on an army base yet since he's been in the military. Yesterday he mentioned that perhaps I could come along this time. I wasn't inclined (all day in the car with Kyler and Tristan) unless there was something in it for me. I looked online and shockingly there was a Hobby Lobby in Fayetteville (home of Ft. Bragg). I haven't been to one in years now, and that was reason enough to go. The base is huge and sprawling, sure enough. It was refreshing to see soldiers everywhere. I've never seen so many. I've seen countless marines here at Camp Lejeune, so it was a nice change of scenery. I actually felt like we fit in.

By the time we went to the picture place and military clothing store, it was just about time to head out if we were going to get home in time to get Hunter from the bus stop at 3:42. So I ran into Hobby Lobby quickly and time flew by before we were on the road again. I did get just a couple of things, but could have spent much more time there. As always, I got to do virtually all the driving. We learned years ago that it's better for our marriage if I drive. I don't tolerate Dean's driving, and he doesn't tolerate my helpful suggestions. So he got lots of work done with his beloved iPhone, which has dramatically changed his life by the way, and I chauffered. Tristan did great as always. Kyler enjoyed the portable DVD player on the way there, and slept on the way back. We did miss Hunter's bus stop by a few minutes, so he was at the neighbors'. We grabbed him and went to his parent teacher conference at 4pm. Then home again and I whipped up some scratch-made macaroni and cheese (yum). Kyler didn't eat one bite, and had been whiney all day, and felt warm in the evening. Great - now he's sick. Temp was 101.6.

There's a news story now about a research study that showed a great reduction in white cells (immunity) for several hours after consuming sugar. I don't give my kids juice or any sugary drinks except for a rare treat; I don't give them "fruit snacks" or other such pretend goodness (they eat whole fruit). Desserts, cookies, candy, etc. are rare treats. And they are rarely sick. But now there's candy everywhere and I haven't put it all away, so crafty Kyler is into it all the time. It only makes sense...

I'll post pictures as soon as I get Dean to upload them (still no "hole" on this new computer to put the little disk thingy).
Posted by Living Lavallee at 11:16 AM

Surely your camera has a USB cable? That would definitely be easier than a "hole". In any case it sounds like your kids had a great halloween! :) I'm anxious to see pics.

Yes, we have a USB cable, but it totally drains the batteries in the camera. New batteries are dead after one such usage. So, I wait.

I didn't know that about sugar lowering your WBC count. Good to know. Glad you made it through the holidays.