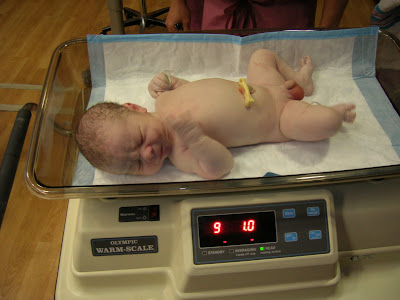 Well, it was bound to happen and it finally did! Wednesday I was having lots of contractions as usual, but they started getting more uncomfortable and even painful toward the end of the day. With some other clues, and especially some labor pains in my back, we went to the hospital after 10pm. The contractions were really painful by then, and close together. I was dilated to 5, and even threw up. The nurse could tell it was Mexican food, and said that spicy food often helps to get things going. The contractions were excruciating, and I didn't feel like I could walk to the labor and delivery room, so they wheeled me in a chair.
My water broke on its own (first time) by midnight or so, and was full of baby's meconium, which they said means some stress on his part. The contractions always vastly intensify after the water is broken, so it was really fun by then. Dean was most supportive as always. I was begging for the epidural, but having not had much to drink during the day, the nurses were having a hard time getting a vein open to draw blood for a platelet count... It took four sticks to finally get one, then what seemed like forever to get the results back and then call the anesthesiologist. The contractions were terribly frequent, and I kept thinking that it would be worth the epidural to relieve even just one of them. It finally, finally kicked in, and as promised by the anesthesiologist, it didn't numb me by any means, but it made the contractions tolerable. I kept wondering how women have done this all through history without pain relief. With Kyler I only had to endure two contractions after my water was broken before they got the epidural going - and that was enough. This time it seemed like there were dozens, and they hurt bad enough before it broke to make a grown man cry...
So, by the time he was ready to come out, they had about 8 people in the room, because of the meconium business - to be ready to suck it out of him before he aspirated it into his lungs. His heart rate dropped a bit when he was crowning, so they had me breathe through a contraction or two before further pushing. I had an oxygen mask on. Then his head came out, and the cord was wrapped around a couple of times, so they undid that, and I sent the rest of him out. Dean and everyone marvelled at how big he seemed, and sure enough he was nine pounds and one ounce, born at 4:45, Thursday July 2. For some reason the placenta didn't want to come out, so the two residents who delivered Tristan worked on that for a while. They were marveling that I had not torn at all, not even micro tears. I never have - what a blessing! Dean was very sweet the whole time, and teared up as Tristan was born, just as he has done for each of the children. Because of what was going on he wasn't able to cut the cord, but was able to trim it down once they took care of Tristan's initial needs. 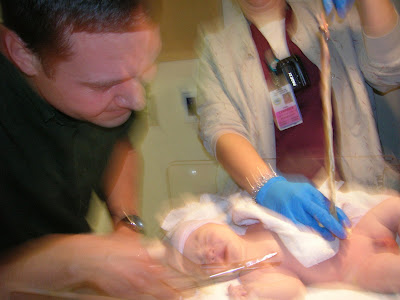 Dean trimming the cord to an acceptable length.

They let me have Tristan about 45 minutes after he was born, and he was very happy to start nursing, and latched on like a charm. That wasn't always the case over the next few days while we were in the hospital, but it was a good start and he loves to nurse now (about 20 hours a day it seems). The boys and Grandma Merrill came to see Tristan, and all thought he was great. We were certainly relieved that Grandma got to see him before she left. She was here two weeks, and he was born two days before her flight out. Hunter went with her to NM to spend a couple of weeks. 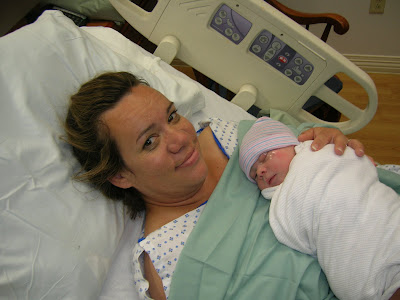 Now at home Tristan is learning to be content outside the womb. It's taking some getting used to, but he's coming around. Kyler is enthralled with him, and we are teaching him to be gentle. My Shrek feet are deflating, and my mom thought my face was starting to return to a normal size as well. There's still plenty of swelling to lose, especially to be rid of the carpal tunnel pain which still plagues me. Slowly but surely!
It is especially nice to have Dean around. In the Army he gets 10 days of baby leave. He won't be able to use all of it as he is leaving at the end of the week for the AVMA convention in Seattle for a few days, then has to get back to work, but this is vastly more time off than we've ever gotten and it's wonderful! He has been so good doing all the mundane stuff around the house, and helping with Tristan as much as possible, and wrangling Master Kyler. 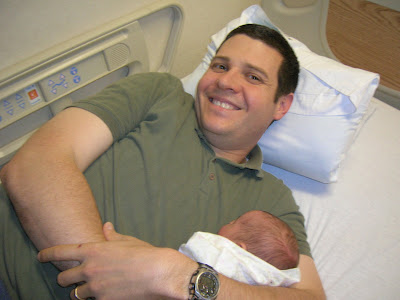 Daddy and baby taking a break. 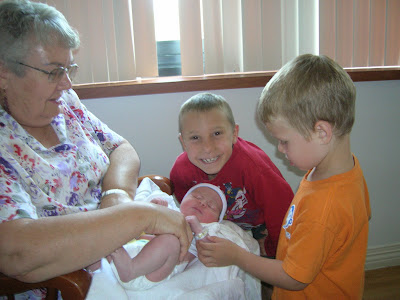 Grandma and the boys.
Posted by Living Lavallee at 11:47 AM

Congrats Becky!!! As beautiful as newborns come all pink wrinkly and new! Good thing to know about the Mexican food!

We are sooo happy for you, he is absolutely adorable! congratulations! I was praying that everything would happen before your Mom left. I'm so glad he came on his own. He's wonderful! congrats again!

So cute. Congratulations to your family.

Congrats! What a big boy! You are awesome to endure labor through a baby that size. He is so sweet and I hope you enjoy him a ton. :)

I love reading about the birthing story because it makes me realize that I'm not the only one who had it pretty rough. He is SO cute and I am so glad that you get to have your hubby help. Jared didn't have to but the day after Gavin was born, he went to work for a half day. Then only had 2 days after that before he needed to be back to work. Uggg.
Congrats again!

How sweet!! Congradulations on your new baby! I'm sure each one is equally miraculous!

Sorry to not comment sooner but we've been out of state and away from the computer :( He is a beautiful baby and you look great (and really tan in the picture with him). Glad your mom got to be there for the big event and help out even though she had to leave shortly thereafter. Congratulations to all of you!