Or maybe more appropriately the circus that is living with Master Kyler. Sometimes I don't know if I should laugh or cry. That kid usually has the household in an uproar to one degree or another. I could give blow by blow accounts of the day, but that would consume novels, so just a highlight or two from the last few days of recent memory should make the point:
On Thursday we got home from somewhere. He rarely follows me into the house from the car willingly, so after hauling in whatever I had, I headed back out to collect him. He had his pants/underwear around his ankles and was standing up straight. This isn't necessarily unusual in itself - however, he said that he was pooping. That is far more unacceptable than what he would normally be doing in that situation, and I proceeded to march him into the house. As of yet there were no deposits from him. He hooted and howled all the way, and did leave one small snippet before we got to the pot. After filling it up, he got to go back and retrieve his mishap.
Friday: something earlier in the week possessed me to brave the circus - without Dean. Normally such a feat would be unthinkable, but I figured it would be cheap entertainment for the evening. I had free passes for the boys, and bought my ticket in advance for $12. Dean said on the phone that he couldn't believe I was doing it on my own - neither could I by the time it was over. So, on the way there, Kyler decides to pee his pants, in the car. The kid has been perfectly potty trained for nearly a year and a half, since he was 27 months. That hasn't stopped him from just letting loose about every 6 months or so for no good reason (that isn't often enough for me to think about keeping spare clothes in the car). My options were to forget about the circus and just go back home, as there wasn't enough time to go home, then make it to the circus, nor was there time to stop anywhere on the way and just buy something to wear (even a diaper with no pants wouldn't have bothered me, but alas no time). So, I got to smell him all the way there, and all throughout the circus, and all the way back... Then, to add insult to injury, I had to take the carseat out of the car, and figure out how to take it apart to get the cover off and wash it. That is always a terrible ordeal, but it got done. 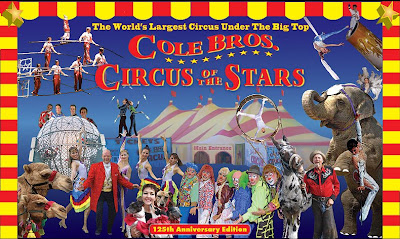 The circus was excellent, by the way, with all the excitement one would hope for, such as the motorcycle guys in the cage, the guy being fired out of a cannon, girls hanging from and doing acrobatics by their hair, and much more. I stuck to my guns and didn't drop an additional cent, as their objective is to separate you from all your money. I didn't even pay for parking, and we all got a little exercise to boot by walking a bit!

Saturday, we went with some friends to an awesome aquarium that is about 45 minutes away. That was lots of fun, and Kyler wasn't terrible there - just the typical running away and such. When we got home, once again he didn't come inside, so I went out to retrieve him. He was on top of the car jumping up and down as though it was a trampoline. I've been telling him lately to not climb the car - the kid climbs anything and everything, and if it isn't hurting anything I usually let him - he's never fallen yet. But the car is a different story. So I marched him to his room for a time out. 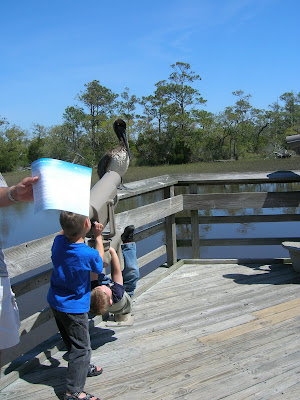 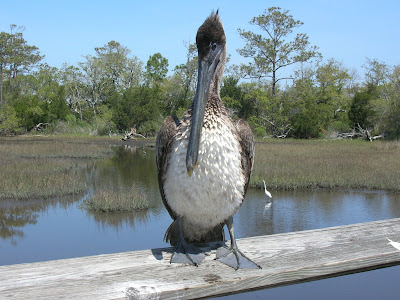 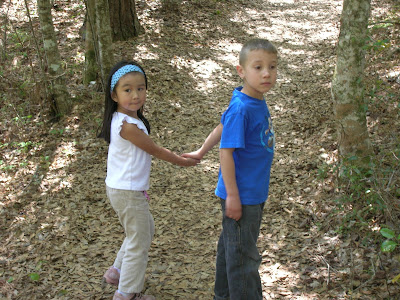 Hunter is getting up close and personal with the pelican in the first picture; Kyler would be the one hanging from the viewer. I happened to be standing very close to where the pelican is in the picture when it decided to come over and land (I was momentarily concerned that it might land on me or do a dirty deed on my head). I assume it was looking for handouts, but it was amazing to see it so close and friendly. Hunter and his little friend were so cute holding hands on the nature trail.

Today, Sunday, we went to church as usual. I sat behind a friend who has kids Kyler's age and younger, with whom he loves to play. That seat happened to be open, as we don't ever get to church on time, so that's why we sat there - I do know better than to put such a temptation right in front of him. He proceeded to act like he was on fire or something, gyrating uncontrollably and being terrible. I wanted to nip that in the bud, so I marched him right out to his car seat and locked him in for a few minutes until he decided he wanted to be good and come back in. The rest of the meeting was unexceptional, although he never was perfectly still or quiet (far from it, but at least under control). I sent him and Hunter off to Primary after Sacrament Meeting, and apparently they both went there just fine. But after the three hour block of classes, the Primary Secretary brought the boys to me and was very apologetic and said that he had apparently left primary shortly after it started (it is for 3-11 year-old children) and went to the Nursery (for 18 month -3yo children). He is well aware of how much fun Nursery is, and that it is stocked with toys and snacks and endless play. With the right attitude, Primary can be fun, as they sing songs and have interactive lessons and such, but apparently the temptation was just too great today, and off he went, apparently unnoticed. Oh, and did I mention that he peed on his bedroom floor this morning before we went to church, just for grins?
He can be the sweetest little devil, and is full of hugs and kisses all day, and loves to rub my ever-growing belly and talk about the baby. He is terribly cute and good looking, and is funny and occasionally obedient. We do love him to pieces, and life would be dull without him. I'm re-reading John Rosemond right now, figuring out what I'm doing wrong. So, slowly I am making progress. He is starting to listen more the first time, as the consequences are happening immediately now, rather than useless threats, bribes or pleas.
Anyway, that's my boy!
Posted by Living Lavallee at 6:18 AM

OH my goodness!! That would be hard to handle NOT being pregnant. I do have to admit that those stories are pretty funny though. Hang in there!
When are you due?

Sure enjoy reading about the daily adventures at the LaVallee home--and your descriptions of them!! Keep them coming.