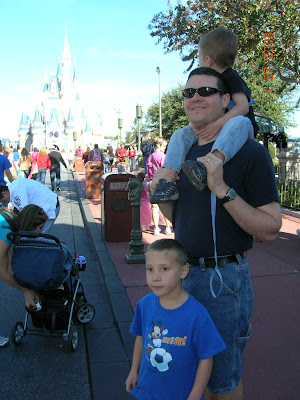 For no good reason I never did post anything about Thanksgiving. We made a 12-hour drive down to Kissimmee, Florida to meet up with Dean's family, who flew in from Oregon and New Mexico. Admittedly, neither of the car rides was enjoyable for us or the children. But the time there was a lot of fun. On Thanksgiving Day, Grandma Dee treated us to the Magic Kingdom at Disneyworld. Hunter must have thought he was in heaven, and gleefully had a magical day. We knew better than to take Master Kyler, but didn't have any other options for him. He demanded to sit on his throne most of the day (aka Daddy's shoulders), and expended a lot of energy trying to make the rest of us miserable, and fighting against his leash (during the few moments he was off his throne). There were many, many other people with the great idea of spending the holiday there, so the lines were long, but we had fun. We did take a stroller for Kyler, but he wasn't much interested so it mostly carried my purse.
The following day we had a lovely Thanksgiving dinner. The greatest excitement during the event was when Kyler attempted to climb on Daddy (possibly his shoulders again) just as he was standing up from a sitting position. The result was that Kyler's head landed on the coffee table, which happened to be wicker with a glass top. The top completely shattered. Surprisingly and luckily, Kyler was stunned, but unhurt. The men quickly cleaned up the mess, and Kyler recovered after howling for a while.
We took the occasion to make the announcement to the family that we are expecting a baby. The due date is late June. We are thrilled! I attribute finally being pregnant to the Naturopathic Physician I have been seeing since early this year. 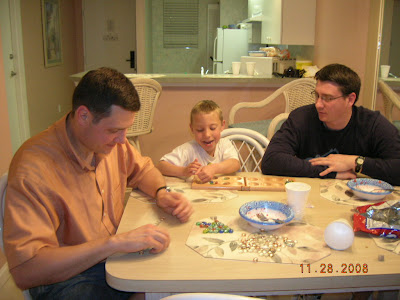 Hunter is the Mancala Master.
Posted by Living Lavallee at 10:20 AM

So great to hear you are pregnant! How are you feeling?

I actually feel great as long as I eat every couple/few hours. I only get sick when I've gone too long, and I'm not much fatigued any more. I'm over 15 weeks now.

We're excited for you and the new baby! Glad things are going well for you. It'll be exciting to find out what you're having. Hope all continues good.