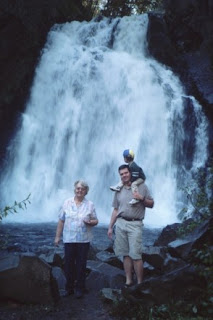 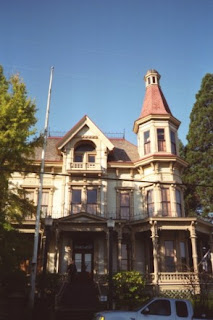 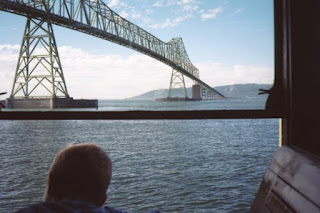 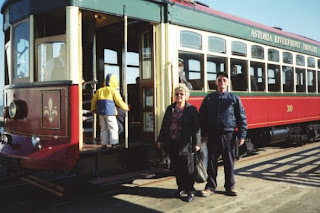 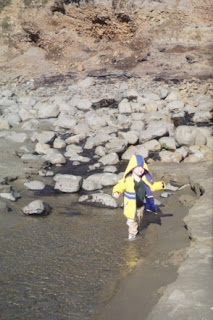 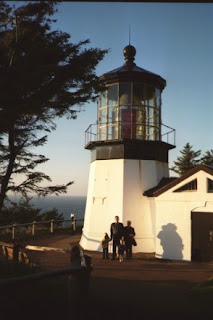 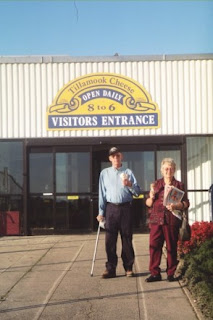 We had a nice visit with my parents, and saw lots of the sights in the vicinity. Some were new to us, and others were fun to see again. We drove to Tillamook to the cheese factory and out to a light house near there, along the coastal Highway 101. We rode the trolley and went to some museums, as well as across the "big bridge" as Hunter calls it into WA state a couple of times. We took my dad to several of the local museums, and we all toured the Flavel House which is an antique Victorian mansion built by the renowned Captain Flavel. The children were terrors, naturally, and the lady working there had a fright and got after them a couple of times. I need to put a pet carrier on wheels and stuff them in it when we take them out in public. If only!

I did tow the car to St. Helens, and it wasn't too bad, surprisingly. Another set of problems was fixed, only to find more. It's funny - I was pleased all this time that we never had a single problem with it, until starting at about 75,000 miles it seems to be falling apart. Dean's Sentra goes into the shop tomorrow. Will it never end?

We had Super Saturday here for Home, Family and Personal Enrichment (or Homewrecking as my sister would say) a few weeks ago. I taught how to make ribbon wreaths, and learned to make a scripture tote from a placemat. I showed Dean the placemat I had picked out before hand, and he clearly didn't care for it. But it is a hit with everyone else (especially me), so that's ok! It is very simple to do, and here's a link for how to do it. I didn't do the foofy embellishments, just put the handles on and sewed it together. http://www.jcarolinecreative.com/Merchant2/merchant.mvc?Store_Code=JC&Screen=PLACEMAT

We had occasion once again to call poison control recently for Kyler. I sent Hunter out to pick the mushrooms growing in the back lawn (to throw away). Apparently people come here to our development looking for psychedellic mushrooms in the fall. I don't recommend that, as the locals have stories of people who have died doing that - not to mention that I don't recommend getting high in the first place. Anyway, Hunter has learned to manipulate Kyler into doing his assignments for him, and later in the evening I was praising Hunter in front of Daddy for picking a whole bag of mushrooms. Hunter then said that Kyler did it, and ate some. Oh, great. "Let's take him straight to the ER" said the in-house veterinarian "as the poisonous kind shut down the liver and cause death within a couple of days." "Let's look it up online and call Poison Control" said the rational, penny-pinching homemaker. We opted for the latter, and Poison Control was on top of it as always. Apparently they are more likely to be poisonous if they are growing right under a tree, which they weren't. We watched for the symptoms and talked to P.C. a couple of more times over the next 24 hours, and he was fine - so apparently whatever he ate was not toxic. In the past Kyler has managed to dine on Vitamin A, Pinesol, nail polish remover, and possibly more but that's all I can think of now. The Vitamin A was apparently the most potentially harmful, and I actually gave him syrup of ipecac (it was either that or take him to the ER, said the P.C. person). I had a doctor's appointment soon after, and was holding him with the doctor and nurse in the room one of the times he vomited. Oh, the joys of parenthood!

The piano is back up on its broken leg, and my giant bruise has healed. It itched as it was fading.

Halloween was fun, for the children. They didn't seem to know what to do most of the time they were trick or treating and would just stand at the door. Kyler would sometimes wander into the house, or jump in the bushes, or chase the family pets. We had to prompt them to say "trick or treat" much of the time; Kyler was often first to say "thank you". It feels so much like door to door begging to me, so I just took them around our cul-de-sac and let Dean have them after that while I passed out candy at home.
Posted by Living Lavallee at 10:40 AM

I feel alot more normal after hearing about your parenting fun. I made a couple of bags out of placemats a couple of years ago. One for Wendy for her birthday and she uses it for her scriptures and the other is my purse which I made out of 2 placemats so I could have a couple of dividers in the purse. It is still holding up well. Good to see your settling in alright.

Your blog looks great! What a fun place to be. It sounds like you are doing well. We miss you. Happy Thanksgiving.

Hey, This blog made me laugh because even though I haven't seen you in a long time I can still picture you saying it. Hope you had a great Thanksgiving.