Whew - I'm glad that's over with!  We had the combined excitement of Easter, along with the joys of the first science fair project, due today.

We spent much of Saturday wrestling with the project - which was to be a model of something.  Hunter was interested in why bears live in caves, so for the past month we've been mulling over it.  He tried cutting a cave out of cardboard (with my sewing scissors, no less) and it wasn't too terrible, I thought - especially since he did it himself.  I'm convinced that the "good" ones are done by the parents, just like the good pinewood derby cars are done by the dads.  It's a bunch of hogwash to me. 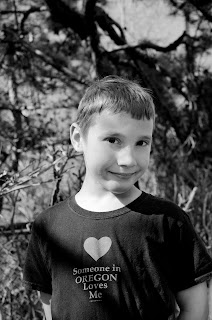 Dean googled ways to make a cave, and tried with the best excuse he could find for plaster of paris in Korea, but that didn't work.  He tried making a substance out of shredded newspaper and water, which also didn't particularly work...  Hunter didn't seem to much care about the whole thing.  Why would he, since his teacher showed me the class homework chart at parent teacher conference last week, and Hunter has turned in homework two times in the last 30 days.  Every day he tells me a different excuse for why he just can't do it (forgot it at school, already did it - but it doesn't get turned in, etc.)  But his reading comprehension is three times higher than necessary, because he spends the day at school and home reading.  That doesn't seem so bad, except that he doesn't do his classwork or think he should have to do anything else at home.  His teacher has to take books away from him all day.

I ended up staying up until 1am last night finishing his three-panel presentation poster and cutting our last attempt at a cave out of some packaging material that came with a small appliance.  Of course the information that he came home with about the project used the example of doing an experiment to determine which metals have the highest heat capacity.  Are you kidding me?  In elementary school?  I didn't learn anything about that until college.  I don't know how people with multiple kids in school deal with that.  I vowed that I would never *do* my kids' homework, but there I was doing it for him.  In third grade he couldn't have possibly done all that.  He hardly knows how to use the computer - by my design. 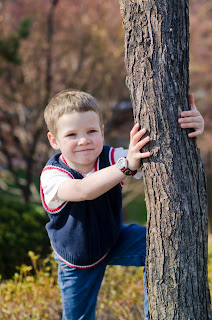 Anyway, I hosted an Easter lunch and had lots of lovely ladies over, most with kids, and we did an egg hunt behind the building.  Tristan caught right on after I showed him how; Kyler was busy bumbling below our balcony and missed the whole thing.  Dean dyed eggs with the boys late on Saturday and we put them out on Sunday morning, along with their baskets.  I didn't get pictures of any of that.  Dean and the boys watched The Testaments in the morning before church, then we had our home teaching group over for Easter Lunch, which is always nice.  Angela and Corinna are both fabulous, but Adam had other plans for the day.
﻿
Tristan has learned some new skills of escape.  He can unlock and open our front door, then go through two sets of double doors to get out of the building and chase birds into the street, or whatever else he fancies.  He can open the bedroom windows upstairs with nothing between him and the clear blue sky.  I had the maintenance people come install a chain lock on the front door which worked for almost 24 hours keeping him in (to his dismay), but then I got home from a shopping tour of Myeongdong and proceeded to open the chained door, which promptly broke the chain...  Now we have a baby gate in the doorway.  Tomorrow I'll call about getting the windows locked.  He loves to dump out Comet/Ajax cleanser, and also dumped nearly 10 pounds of flour on the floor on Saturday.  He can get right out of his crib now, which means he won't nap or go to bed.  I'm weary to say the least.

﻿
My belly hurts when I walk much at all, and Baby moves a lot and often puts pressure on me.  I have BH contractions frequently, especially after doing anything.  I have to make an effort not to waddle by the afternoon.  I am remarkably better off than I have been in all the pregnancies with the boys, however.  With them I had vicious carpal tunnel syndrome in both arms, hideous swelling of everything - particularly the nose and face, my voice deepened, near-constant heart burn, and new stretch marks with each one.  This time I have each of those maladies on a much smaller scale, like maybe three times have my arms given problems at night.  I don't have any new stretch marks - and am still crossing my fingers.  I am still wearing my wedding ring, and can still wear a number of my shoes.  I do have 7 weeks to go, so it's only going to get worse, but still it's not as bad as in the past.  It must be a girl, and already she's being nicer to me!!!  Still no agreement on a name yet.
﻿
Posted by Living Lavallee at 8:32 PM

You are one busy momma! I do hope that your little girl is nice to you...you deserve it! :)

Nice to be updated on all the news of your family.

The homework they assign is so annoying. Sometimes I think I'm going crazy trying to help everyone. I WON'T do it for my kids either, but feel that I have to help.